Happy birthday to Cindy Parlow Cone, three-time NCAA Women’s Soccer Champion and founding member of the Women’s United Soccer Association, former head coach for Portland Thorns FC and in her first year as coach in her first year as head coach of the Portland Thorns, led the Thorns to the NWSL Championship. Parlow was a member of the 1996, 2000, and 2004 Olympic, and 1999 and 2003 Women’s World Cup, teams. Parlow Cone played professionally for the Atlanta Beat for three years and was the Coaching Director of 13-18 year-old girls’ programs at the Triangle United soccer league.  Cindy is a co-founder of Goals for Girls.  Birthday –May 8th. 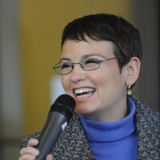 Is now the time to try karate? Renshi Lisa thinks so!